A sense of urgency permeates the air in Lombardy as well as in neighbouring Piedmont, Emilia Romagna and Veneto regions, regarding Italy’s network of navigable canals and rivers. What reality will be revealed to the world of inland waterway specialists and advocates, meeting in Milan on September 1st for the 27th World Canals Conference? It is a reality of water conveyors and waterways, in places going their separate ways, but often combined within the same bed. Waterway cross-roads, intakes, siphons, spillways, aqueducts are the nodes of an intricate network spun across the Lombardy plain, and nothing is simple. Even Italy’s second biggest Alpine lake, Lago Maggiore, is used as a reservoir and drawn down by as much as 1.50m to secure irrigation water supplies during a dry summer. 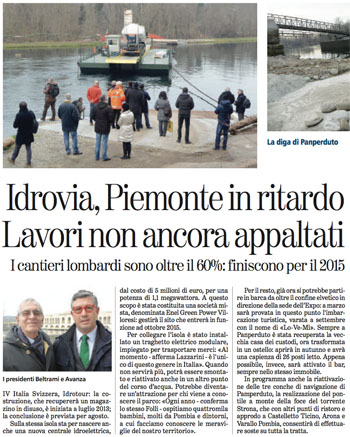 The ambitious project to restore navigation between Lago Maggiore (Locarno) and the river Po is regularly covered by the regional and national Press. This article focuses on work to start soon on a new lock at Porto della Torre, on the Piedmont bank of the Ticino

It is nearly 20 years since IWI’s founders attended a conference in Milan on the ‘civilisation of water and waterways’ and the heritage left by Leonardo da Vinci and other great Italian engineers. At that time a grouping of Rotary clubs in the Adda valley was actively promoting restoration of the locks on the Adda as well as the Naviglio di Paderno (followed by the Martesana towards Milan). The campaign sadly lost momentum after the president Mario Roveda died of a heart attack in 1997, but IWI, represented in Italy by industrial archeology expert Edo Bricchetti, has constantly been supporting the regional initiatives in favour of a navigable system serving ‘slow’ tourism and appreciation of the extraordinary heritage and environment of the canal corridors.

Navigli Lombardi was founded to drive these efforts, but does not manage the canals themselves; that is the prerogative of the Consorzio Villoresi, which has the concession from the Region to manage the water resource and supply the many needs of agriculture, industry and the population. This means that the ‘water conveyor’ function has priority here, in the same way as it has priority on another famous southern European canal, the Canal de Castilla in Spain.

Despite this priority, politicians in Milan and across the plain, including the neighbouring regions, are massively in favour of restoring and adapting the 1000-year legacy of canals and controlled rivers, to make navigation once again a regular form of mobility in both urban and rural areas. 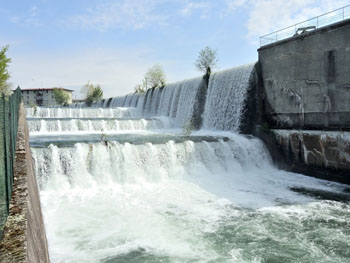 Achieving this goal means compromises and concessions. As climate change increases the pressure on water resources, it is likely to become increasingly difficult to obtain management of water channels that is compatible with navigability, even by professional helmsmen. Another difficulty faced by all players in Lombardy is a certain degree of confusion in the minds of Milanese citizens, possibly even some planners and architects, between water conveyors and waterways. This is only the briefest of introductions to a fascinating story that will be told here in the coming days and weeks… background notes for the discussions during the World Canals Conference and the pre- and post-conference tours. (to be continued)
David Edwards-May

One thought on “Water conveyors and waterways in Lombardy”