Claudio Repossi of Navigli Lombardi reports on a series of events to raise awareness of the historic, cultural and recreational values of the Locarno (Switzerland) to Milan waterway via the river Ticino.

As part of the joint Italian-Swiss project Intrecci sull’acqua – or Dialogue on the Water – a series of initiatives have been launched, including guided tours of the area and pleasure boating on Lago Maggiore (Verbano), along what is known as the ancient ‘Marble Route’.
(supplying marble for the construction of Milan’s cathedral).

Events planned for the weekends of July, August and September were organised thanks to an agreement between the municipalities involved, the Lombardy Region, the Province of Novara and Navigli Lombardi, the last of which has been active for years with its passenger boat service on the Ticino running between Sesto Calende and the Miorina Barrage (and former lock).

Miorina Lock and Dam on the Ticino River in Lombardy, on the 'Marble Route' (photo © Vito Antongiovanni)

The project includes navigation on the Ticino and on the Lake, partially covering the route taken of old by the barges that carried the precious construction material along the lake-river-canal waterway to Milan.

Today the former waterway is no longer navigable throughout, but great efforts are being made, at a time of crisis in public finances, to reopen it. Miorina lock on the Ticino has recently been restored to working order, and the Panperduto dam, machine hall and adjacent lock are also being rehabilitated. Begun in 2011, the works are financed by Lombardy Region, Consorzio Villoresi, Navigli Lombardi and the electricity utility ENEL, and are to be completed in 2013. Piedmont Region for its part is gathering the funds necessary for the restoration of the Porto della Torre barrage.

Once the works to restore the hydraulic structures on the Ticino are finished, it will be possible to navigate from Lago Maggiore to the start of the Industrial Canal, with four locks to restore as the last obstacle before the final link-up with the Naviglio Grande and Milan.  The Naviglio Grande is already navigable from Turbigo to Cuggiono, albeit with some size limits.

With Expo 2015 in view, an accord for an integrated plan for maintenance of the infrastructure of Milan’s canals and for the valorization of the Navigli and Lombardy waterways as an asset to tourism, the environment and culture, was promoted in May this year by the Lombardy Region, Consorzio Villoresi and Navigli Lombardi. Also involved are the Park management bodies for the Adda Nord Park, the Ticino Park, and the South Milan Agricultural Park. The programme, requiring an investment of around €20million for works to be carried out by June 2015, proposes substantial repairs to the banks of the Naviglio Grande and Naviglio Martesana. It has among its primary objectives the promotion of a Leonardo da Vinci cultural tourism trail along the Lombardy waterways where he experimented successfully with some of the most brilliant hydraulic inventions: the lock flight, the Da Vinci lock and its characteristic stepped upper sill. It also aims to promote the ‘Feed the Planet’ programme, principal theme of the 2015 Milan Expo. 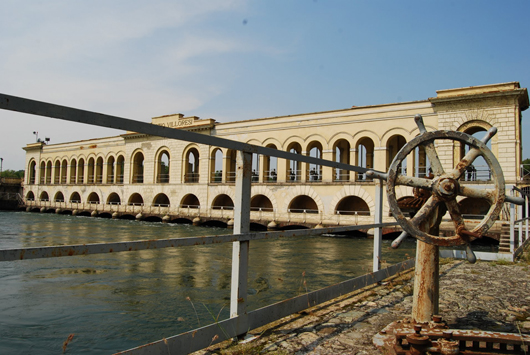 Panperduto dam and Villoresi hydropower plant on the Ticino, with one of the lock-gate winding capstans in the foreground (photo © Zilvana)