Canal historian William E. Trout III* will attend the World Canals Conference in Yangzhou, China, this September with an agenda. He hopes to find out what happened to the Emperor’s lock model, taken from England to China in the late 18th century. This mystery is tied up in the broader history of technological development of hydraulics and engineering related to locks and inclined planes for inland navigation.

Professor Needham presented convincing evidence that the Chinese were the first to invent the pound lock – with a lock chamber – and that many locks were in use while large government boats plied the canals 1000 years ago. However, by the time European travellers began to rediscover China, the large boats were no longer used, and locks had been abandoned in favour of flood-gates with inclined planes or slipways, which were found to be better suited for the comparatively small boats then in use. In forming their impressions, they did not have the benefit of, Hu Su’s vivid description in 1027, quoted by Needham: ‘The lock basin is deep as the home of a sleeping black dragon, and like a dragon, the water rises in the pool, so that the ships come and go continually,  borne on waves like the tide flowing and ebbing. When the great gates are closed the water forms a whirlpool as the lock fills, and the white foam washes sides that never dry.’ 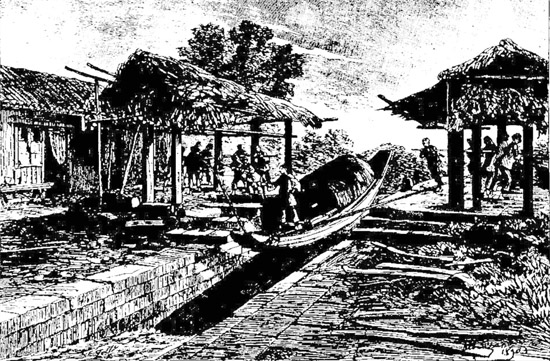 Inclined plane for small craft in China, similar to the 'overdracht' in Flanders

In the late 18th century, when the canal era in Great Britain was just beginning, the western world not only thought that the Chinese were ignorant of locks, and lacking in inventiveness; but were so bold as to present a lock model to the Emperor of China, as a technological present from western civilizationl This model is mentioned in a handwritten comment which Bill Trout discovered in a William Chapman’s Observations on the Various Systems of Canal Navigation, published in England in 1797 (he saw the copy in the library of The University of California at Berkeley). This book, dedicated to the Duke of Bridgewater, England’s ‘Canal Duke’, is subtitled ‘with inferences practical and mathematical, in which Mr. Fulton’s plan of wheel-boats, and the utility of subterraneous and of small canals are particularly investigated, including an account of the canals and inclined planes of China‘.

William Chapman (1749-1832) was consulting engineer on the Grand Canal of Ireland. In the middle of his fascinating discussion of inclined planes, boat lifts, and other inventions, he observes:

‘It is an argument against the inventive powers of the Chinese, that they have not hitherto constructed Locks, as a great part of invention lies in the conception of the possibility of the event; and the Chinese have been informed, for upwards of a century, of its absolute possibility; as the Jesuit Missionaries sent to China by Louis XIV, in 1635, acquainted them with the principles of a Lock, with which they appeared astonished. The Fathers also thought that anyone who would carry to China the model of a Lock would be well received; and cause as much admiration as the first watches that the Missionaries presented to the Emperor.‘

This suggestion by the Jesuit Missionaries seems to have been taken up, because at the end of this paragraph a cross in the margin points to a handwritten note at the bottom of the page: ‘Dec. 1797. I gave one to S. G. Staunton before he set out, and he and it has as yet never been heard of – R. Mylne‘

Because the title page of this copy of the book is inscribed, ‘Robert Mylne Esq. from the Author‘, we know that this marginal note was by Robert Mylne (1733-1811), architect and engineer, involved in the Gloucester and Berkeley Canal and the Worcester Canal, and described by a cartoonist as the ‘firey comet‘. Sir George Leonard Staunton (1737-1801), to whom Mylne gave the lock model, was a born diplomat, a friend of Dr. Samuel Johnson, and Minister Plenipotentiary of Britain’s first ‘embassy’ or delegation to China, under Lord Macartney, in 1792, five years before the date of Mylne’s marginal note.

The obvious inference is that Mylne’s lock went to China with Sir George. But what happened to it?

Sir George Staunton was ill when he returned from China in 1794, so that may be why he never got in touch with Mylne. He had in fact planned to remain in Peking as the British Minister but his health prevented this – as well, no doubt, as a rule of the Emperor that any ambassador desiring to reside in Peking had to stay there for lifel As it was, the delegation was hustled out of China after a stay of only 47 days. Critics at the time charged that this was because Lord Macartney refused to kowtow before Emperor Ch’ien-lung. However, a table was drawn up showing that all embassies to China had been eased out in a short time so prostrating oneself made no difference.

Sir George probably entrusted the lock model to the delegation’s scientist or ‘machinist’, Dr James Dinwiddie (1746-1815), who had been giving public lectures on science throughout the British Isles, complete with ‘philosophical fireworks’ and balloon ascensions, so was the ideal person to demonstrate western science to the Chinese Emperor. Dinwiddie described his duties as ‘the erecting and regulating the planetarium; the constructing, filling and ascending in the balloon; descending in the diving bell; together with experiments on air, electricity, mechanics, and other branches of experimental philosophy; astronomical and other calculations‘, and presumably the demonstration of Mylne’s lock model. Unfortunately for canal historians and the Emperor’s court, this series of spectacles never took place, because Emperor Ch’ien-lung was not at all interested in foreign science and technology. Dr. Dinwiddie heard him say, when inspecting an air pump, ‘These things are good enough to amuse children‘, but otherwise were of no interest to the Emperor and his court. Perhaps one reason for this indifference was that the great Lord Macartney, representative of His Majesty’s government, and his entourage, were considered mere merchants or traders by the Chinese and therefore of extremely low rank. No self-respecting Chinese scholar who knew English dared stoop to serve as translator, and by decree, foreigners were not allowed to learn Chinese, and any Chinese caught teaching them had to be punished. Macartney’s translator was a Chinese who knew Italian. So although the lock model may have been demonstrated to the Emperor (as the air-pump was) it obviously made little impact on Chinese science, despite the prediction of the Jesuits 100 years before. Also, the language barrier made it impossible to delve deeply into Chinese culture. Dr. Dinwiddie did, however, get a good look at the canals and made the following significant observation:

‘The flood-gates in the canals of China are preferable to English locks in every situation where the canal is nearly level, and are constructed at a quarter of the expense. The inclined plane down which the boats are launched and up which they are drawn is a mode superior to our practice, for besides their being cheaper they are much more expeditious. The power employed consists of two windlasses. placed opposite to each other on the banks or abutments of the canals, the axis perpendicular, the gudgeons of the lower end supported on a stone and the upper end turning between two stones, sustained in an horizontal position on four upright stones. Each windlass has four bars which are manned with twelve to sixteen persons. The time employed in one instance observed was two minutes and a half, and in another about three.‘

But we are still left with the question, what happened to John Mylne’s lock model? Curiously, Chapman’s 1797 book, in which Mylne made his notation, has material on China obtained by the delegation, and actually quotes passages from Staunton’s account. If Chapman had known about the lock model, he would surely have mentioned it. Perhaps because the scientific programme of the delegation was something of a fiasco, it was not widely publicised in England. But there may be another reason why Chapman and Mylne were not informed about the lock model. When the delegation returned to England in 1794, Dr. Dinwiddie stayed behind, taking a closer look at the canals, and then sailed to India with the scientific apparatus – which the Chinese had ignored – presumably including the lock model. He stayed in India until 1805, lecturing on science and on China, and for five years was Professor of Fort William College in Calcutta. This raises the interesting speculation that Dr. Dinwiddie may have introduced canal locks to Indial Has anyone worked out the history of canals in India? In any event, it is possible that he did not take the model back to England with him in 1805, but left it with Fort William College, or with the East India Company’s Botanical Garden in Calcutta where he delivered some of the material collected by the delegation; but inquiries in India have not yet turned it up. There is still hope that Dr. Dinwiddie himself can tell us more about the Emperor’s lock model, in his journal, if it can be located. (Extracts were published by his grandson. W.J. Proudfoot, in 1868.)

What, indeed, did you do with the Emperor’s lock model, Dr. Dinwiddie?

* This article is based on Bill Trout’s research published in American Canals, No. 40, February 1982, inspired by the works of Professor Needham: Science and Civilisation in China, and a detailed article in the Transactions of the Newcomen Society