‘Small is beautiful’ could be a motto for canals, especially in cities. And this simple precept is now being followed in the Netherlands with spectacular results. This was the main lesson learned during the EU Waterways Forward partnership meeting in The Hague on May 30th-June 1st.

During the first day of proceedings, May 31st, delegates discovered the ambitious canal restoration plans of South Holland and the association of local authorities RegioWater. The above extract from their planning map shows the remarkable density of ‘water routes’ which could potentially be opened up to navigation in boats of the appropriate dimensions. The green lines are all routes not normally available to recreational boats, while the crosses mark specific obstacles to be lifted, usually very low fixed bridges. The one furthest to the west, the Moerbrug, is said to be too low even for swans to pass under! 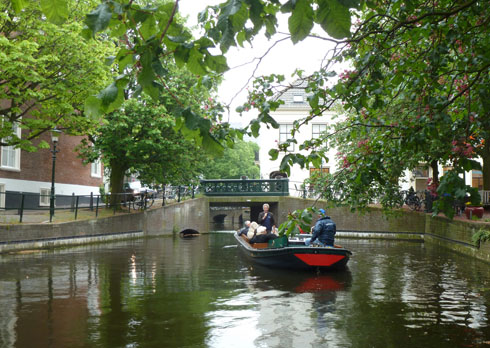 A vivid demonstration of the issues – and the potential – was provided in the afternoon, as the 25-strong delegation (with members from the UK, Ireland, France, Italy, Poland, Hungary, Latvia, Norway and Serbia, as well as the host country) embarked on two open trip-boats run by the association Ooievaart, to discover the ring of canals (green on the map, beside the name Den Haag).

Despite rain of similar intensity to that experienced by the million visitors at the Thames Pageant for the Queen’s Diamond Jubilee three days later, the 90-minute trip was both entertaining and instructive, as the history of the capital was explained street by street, bridge after bridge. Entertainment came from the numerous covered sections of the canals, where we all had to bend over completely to squeeze under beams, pipes and other protruding parts. It was like being in a surgeon’s probe, exploring the entrails of The Hague. 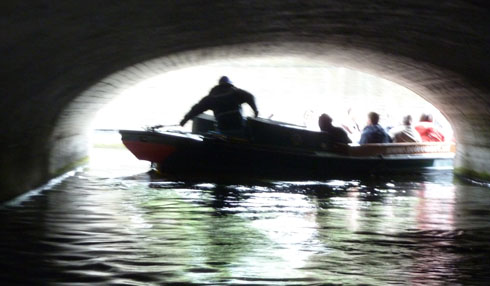 Atmosphere in one of the tunnelled sections of the canal ring

And lo and behold! Structures were already in place to start implementing the RegioWater plan by removing the canal’s cover, to expose it and restore it to its rightful place in the urban environment. As in Lille and in Leipzig, the argument for covering the canals (or infilling them completely) was salubrity, in the absence of proper sewerage systems. With proper sewerage, water quality is now very good. 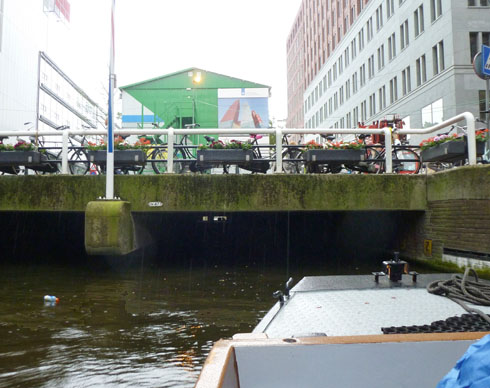 Entering the covered section in the new centre of The Hague

The idea, as the IWI tour discovered in Leipzig in April 2011, is to use the opportunity of maintenance or replacement works to raise the bridges and increase the available headroom.

This means that navigability in larger craft can only be a long-term objective, but the process is to be hailed, as well as the opportunities for exploring such canals in small craft.

Forty years after I was blocked in a hireboat on the canal route south from Groningen to Coevorden, which had just been closed, the phase of economic development which led to the abandonment of so many small canals has clearly come to an end. ‘Small canals’ are now being revived on a significant scale, in both town and country.