Edo Bricchetti, a member of IWI’s Council and The International Council for Conservation of Industrial Heritage (TICCIH), has been tirelessly defending the priceless heritage of Lombardy’s historic canals, the navigli, working closely with the responsible authorities for more than 20 years. During this time, although it does not directly manage the canals, Lombardy Region has set up an agency, SCARL Navigli Lombardi, whose task is to coordinate restoration works, develop tourism and promote the heritage of the canals themselves and their corridors; these canals are the ideal vector to visit gems of architecture, enjoy cultural landscapes and see countless vestiges of the industry that for centuries used the abundant waters crossing the plain. 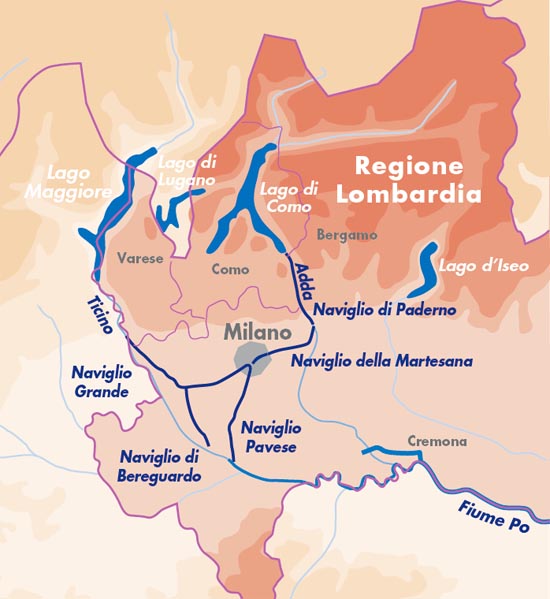 The five navigli between the partially canalised rivers Ticino and Adda

Lombardy at the time of Leonardo da Vinci
When Leonardo da Vinci arrived in Milan in 1482, he discovered works of hydraulic engineering that were already unrivalled in Italy or even throughout Europe. The Viarenna lock, within the city limits, had already been in operation for 40 years, while to the north-east the city was served by the Naviglio della Martesana.
During his 25 years in Milan, Leonardo was to make a significant contribution to improvement of the waterway system which was the most extensive and strategic in Europe at that time.
Between the Ticino and the Po the Padua plain is divided horizontally into distinct sections, between the arid and infertile strip of land to the north and the well-watered lower plain to the south, better suited to agriculture. Springs, irrigation feeders, channels and offtakes conveyed water for irrigation, where formerly spring water and the left-bank tributaries of the Po flowed into stagnant marshes. The canals enabled cultivation of vast areas of arid land to the north of wide tracts of low vegetation and dense heathland. On this network, in the towns, in the villages and countryside, grain mills were established, oil presses, basins for husking rice, paper and felt mills, presses for working metals, tanneries for leather. In short, all economic activity revolved around the waterways, which acquired strategic importance in the regulation of flows for hydraulic energy and for transport.
Lombardy civilisation was founded on this combined use – for industry and agriculture, leading to the development of considerable areas of land, where traditional trades and crafts coexisted with new forms of agriculture, new manufacturing industries, trades and communications.

‘Lombardy, a land of engineers never fully appreciated, and of works left incomplete‘ 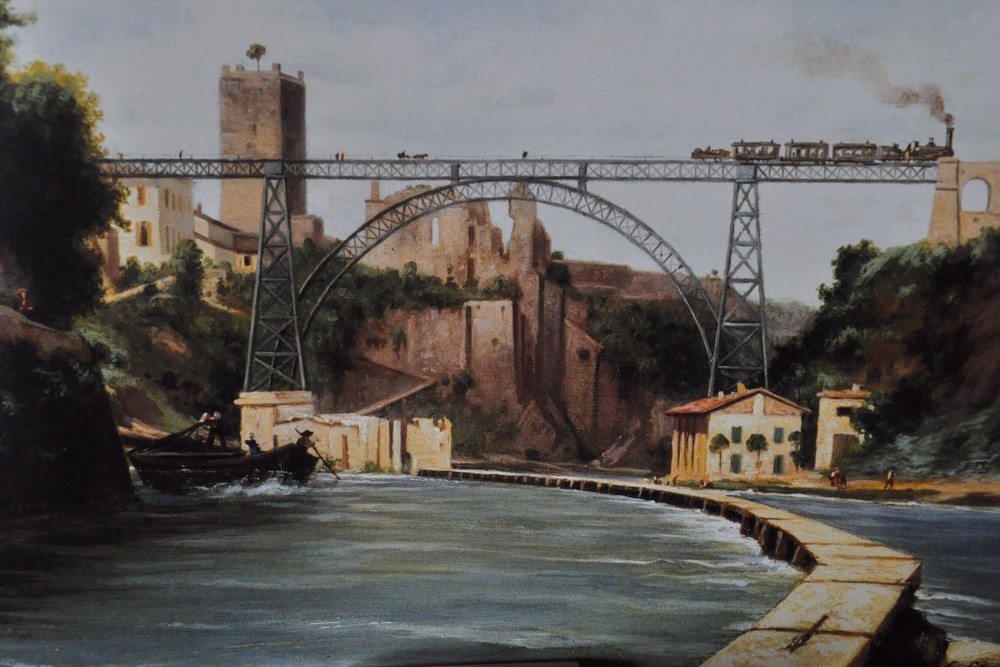 Iron bridge at Trezzo sull'Adda, opened for the Monza-Bergamo railway in 1890; the painting by Carlo Jotti dates from the following year, and shows the entrance to the Naviglio della Martesana in the foreground