We are unequivocally supporting the efforts by the association Unser Finowkanal to secure the future of this important heritage waterway, bypassed by the modern Havel-Oder Waterway.

The Federal Government has declared its intention to close the canal for navigation, convert the locks into weirs and maintain the channel exclusively for drainage.

The only way to avoid this scenario is to secure funding for the considerable investment of €75 million, to cover all costs, particularly to restore the locks. To date, all the locks have been operated each season, using unemployed from the local job centre (and two voluntary lock-keepers), but some repairs have become too urgent, and there is at present no authority nor any funding in place to implement them. 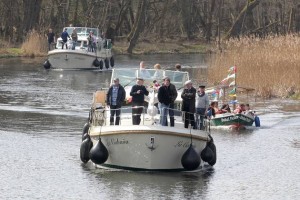 A boat rally celebrates the opening of the Finow Canal for the 2015 season. The association Unser Finowkanal continues its campaign for maintenance and regular operation of the canal, which the Federal waterway authority wishes to hand over to the region.

If one of the 12 historic locks fails, the canal will no longer be available as a through route, and the direct and indirect economic benefits of waterway tourism will be lost to the Eberswalde/Niederfinow region.

The municipalities of the Finowkanal region are under pressure to make a decision by January 2016, for or against their share in the necessary investment, and the issue is being firecely debated. On December 17, the Eberswalde council – with the biggest share in the project – will cast its vote. Only if all the local councils vote in favour of the canal investment will it become feasible to set up a public body to take over operation of the canal.

Investors need to be certain that the future of the canal is guaranteed, Under Federal government ownership, there are no opportunities for commercial activities at the locks or along the banks, volunteer lock-keepers are refused, and the risk of failure of the locks continues to hamper any development.

But regional decision-makers are procrastinating, and most of the officials in the Finow Canal regional working group are keeping a low profile, for fear of being held responsible for the failure to take over the canal.

Some councils are leaning towards rejection of the takeover because of the lack of evidence of the benefits that tourism could bring to the region, justifying their entrenched resistance to change.

Unser Finowkanal president Hartmut Ginnow-Merkert has made a plea for support: if you feel it is important to maintain continuous navigability of the Finow canal, comment here!

Waterway managers from throughout Europe travelled across the English Channel a few weeks ago for a special visit to see cutting edge technology in action on the UK’s canals.
The guests joined the Canal & River Trust – the charity that takes care of 3200 km of waterways across England and Wales – for two days.

The visit included a trip to see the project that will allow remote operation of a bridge on the Gloucester & Sharpness Canal.

Another visit was made to the Grand Union Canal at Hatton to see the new waterway control centre, which houses technology to help manage the Trust’s fleet of workboats and vehicles, issue work notices and schedules to staff and monitor incidents and emergencies. 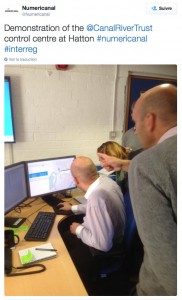 Delegates included waterway managers, technicians and experts from the Netherlands, France and Belgium. They were brought together through the EU-funded Numericanal project, which looks at best practice across Europe of using technology to better run the waterways. Representatives from Scottish Canals and the pan-European boating group The Barge Association (DBA) were also present.

Steve Higham, European funding manager at the Canal & River Trust, said:  ‘We were really pleased to welcome experts from all across Europe to see the work that we’ve done, and it’s encouraging to be leading the way when it comes to canal technology.  Ultimately this is all about how we can work together across Europe to find the best ways of managing the waterways, and it’s great to have so many partners bringing a huge range of experience to the table.’

‘Numericanal’ is a €3.3 million project funded by Interreg NWE, that aims to use technology to enable more efficient management of inland waterways.